I was born in Changchun city, which is in the northeast of China. Changchun happens to be the capital of Manchukuo, a puppet state run by Japanese from 1932 to 1945. You can still find many legacy buildings built by Japanese around the downtown city today. Probably because the city is very close to Japan and its colonial history, I have been exposed to Japanese language, people, stores, restaurants, ads, TV shows and electronic devices ever since my childhood. All these things, together with the crimes they had committed to my hometown during WW2, give me a very complex feeling toward Japan, its people and its culture.

Therefore, going to Japan and finding the deeper reasons for everything I have experienced about Japanese culture have been my little wish for many years. Fortunately, I finally had managed to travel in Japan last month. This article consists of some of my notes and thoughts about this long wished journey.

Tokyo is the haven for designers. Everything you see, from architecture to a public telephone kiosk, is well designed.

Japanese designers seem like to use straight lines and squares pretty much. For example, most buildings I saw in Japan, look like collections of square elements in different sizes. The doors, windows and metals on the surface are all squares, straightly arranged. For a minimalism lover like me, it's the right place to learn.

Like what I wrote on the postcard for my friends, Japan obviously has past the era that focuses on the basic requirements only, like what China is experiencing at the moment. People living in this advanced country have aesthetic needs about everything, from the small stuffs they use in daily lives to the giant skyscrapers where they live and work.

However, Japanese design is somehow a paradox. Right before my journey, I found a very interesting blog post talking about whether or not we should consider Japanese design as the representative of minimalism. (the blog post was actually pretty hot on Slashdot). Jeffrey Zeldman, the author of the article, "brings up the interesting issue of the paradox between Japan's strong cultural preference for simplicity in design, contrasted with the complexity of Japanese websites." When I was walking on the street in Tokyo, I would say he is absolutely right. This paradox doesn't lay in Web design only, but can be found almost everywhere.

For instance, I particularly visited a few bookstores to find magazines that have minimal designs. Unfortunately, I could hardly find any magazines that are even close to being minimal. In each magazine I checked, pictures, color squares and characters were placed on almost every single square inch of the pages, which mades the design look very noisy and cluttered. You will instantly find the huge contrast if you ever compare these with the neat architectural designs.

English is really, really popular in Japan. In most cases you can see English words together with Japanese ones on the brand names, signs, slogans and food. Sometimes you can even see English names only.

Most people I met, from office workers to policemen to retired senior citizens, could at least understand what I was trying to say, which was far better than what I expected. Some of them don't really speak English though, but generally travelers won't meet major difficulties in communication.

There were, however, when I were totally blown away by their pronunciations. For example, they pronounce the word "point" as something like /'pau'jin'dou/, I guess I wouldn't understand the word if I was not in the specific circumstance. The other example that really made my day was they say "Dragon Ball" as /dou'la'gong'bu'lu/.

I later realized that in Japanese these words are not English any more, but more like a part of Japanese.

The night I arrived in Tokyo, I went to see the folks of Asakusa.rb, a local Ruby developer community. We had the so-called Hanami at Ueno Park. Hanami is a traditional ceremony to celebrate the blooming of Sakura (cherry blossoms). We sat right under the Sakura trees, had beers and snacks, and talked about the culture differences between China, Japan and the U.S.. From that night during my journey, I felt a deep regret that we Chinese had developed such a splendid culture, but it’s our neighbors, not ourselves, who managed to keep and advance it further.

The feeling got stronger when I went to the famous ancient city Kyoto (I always feel funny because the name of one city sounds like the opposite of another). Formerly the capital of Japan, Kyoto is now a beautiful tourism city, with many nicely protected temples, Shinto shrines and imperial palaces and gardens. I knew that Japanese had learned a lot from the great Tang Dynasty, but it was not until I was in Ginkaku-ji, a famous travel spot in Kyoto, I realized that the Tang had, and still has, such a deep impact on Japan. For example, according to the electronic tour guide I rented, the host of Ginkaku-ji had imported much china from China and considered learning Chinese poems as modern and fashionable. He even built his houses following the design styles that were popular during the Tang Dynasty. 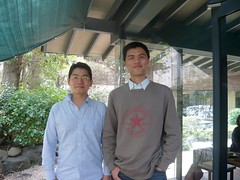 Japanese people are super polite and friendly. They are probably the group of people who say "excuse me" the most. They definitely would try their best to help strangers, even though doing so would cost their own limited time. Take asking for directions for example, every time I asked someone for help, he or she would patiently tell me how to get to my destination. If their English was not good enough for that, they just took me there, and ran back to catch up to their schedule.

The service quality is also at a high level. Wherever I was at convenient stores, malls or post offices, the service was quite enjoyable. There was, however, an exception for NTT DOCOMO, the largest carrier in Japan. I used a traveller 3G data plan from NTT DOCOMO during my travel, but the 3G signal was pretty weak all the time, and NTT DOCOMO refused to help me to solve this problem by claiming that I was using an iPhone that was not their product. How ridiculous!

Tokyo is greatly known for its real estate price. It is said that before the burst of real estate bubble in Japan in 1990s, the value of Tokyo's land was higher than the whole U.S. land. Therefore naturally I wanted to see myself what it looks like today.

The results? I was really hurt. But not for the reason you may think.

On the train from the airport to downtown Tokyo, I saw an apartment advertisement. It said a 72 square meters brand new apartment in downtown Tokyo costs about 34 million Japanese yen. Expensive? Well, not really.

A new apartment with the same dimensions and a similar location in downtown Shanghai costs about 37.7 million yen (for example, a 100 square meters apartment in Wu Jiaochang*), not to mention the huge income difference between two cities.

* People usually use the NET dimensions that the host can utilize In Japan, while in China, in most of the cases we say GROSS dimensions (including the public floor area and the space occupied by the wall).

It's almost been a month since I came back from Japan, I still miss the days when I was walking on the streets in Tokyo, having open-air bathes in Hakone, and learning traditional cultures in Kyoto. The country has left me such a good impression that I start to think about the possibility to get a job there!

In the following chapter of this travel note, I would like to talk about the great TV show Tokyo Love Story, the impact it has on me, and the interesting stories and experiences I had when I visited the places where the show has been shot in Tokyo. The article will probably in Chinese because, I guess very few westerners love the show and I found, surprisingly, that it's not that famous even in Japan.